I got a call from Rob Williams to see if I’d be willing to cut two doors for Extreme Makeover: Home Edition. Rob had a pattern that they wanted to cut into two doors.

The pattern is a 3D cut and I was going to use Mill Wizzard to make the cuts. If I remember correctly, Rob had estimated that each door would take about 16 hours to cut. When the doors arrived on the building site, they were solid core, not solid wood doors, and it’s 5:30 on a Friday. The places where one could get replacement solid wood doors won’t be open until Monday morning and the doors have to be cut and back to the site Tuesday at noon. Several alternative plans fall through one by one.

By Sunday morning I realized that we are going to have to cut the solid core doors that we have on hand. If I use the design Rob gave me, most of what is going to show from the door will be the core of the door. At best it will be MDF or particle board, and at worst, it will be scrap wood with gaps and voids; however, there are no alternatives left.

After a few hours trying some patterns in V Carve, I sent some previews to Rob and the other designers.

The new design retains some of the 3D look but with minimal depth cuts. Rob and the designers liked the previews, but wanted to check with Ty Pennington, the host of the show. More time passes and finally Rob says go for it, there’s no time left.

We were very fortunate; the core was particle board with no gaps or holes. Big Dave of the production crew did his magic and filled, sanded, stained, and varnished the doors.

Because we switched to a V Carve design, each door took only about 2 hours to cut. I think the original design would have been gorgeous in solid wood, but this was a very nice alternative in solid core. 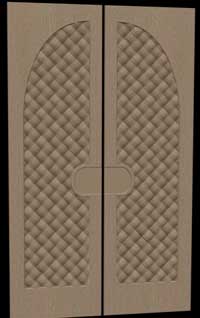 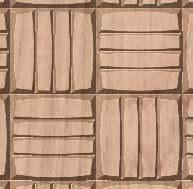