Hello, I am considering getting a new machine to make signs. However, after downloading the VCarve Pro demo software, I can not figure out how to make a sign that 2 layers of raised lettering. Hard to explain, so I am including a picture. Basically, I want to put text on top of text with 1 layer of text at the surface height and the second layer a little lower. However, no matter what I try, the top layer always cuts into the 2nd layer, or the second layer with rout out where the 1st layer letters are suppose to be. Please let me know if this can be done and how. Thank you so much. So far I love the software, but if I can only get around this problem, I will be much happier. Thanks again! 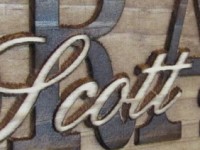 Welcome to the forum.

See if this helps:

Big steps are to create the text you want and get it properly positioned.

Select the text, right click and use the Copy to Layer command to send a copy to a new layer. Make this layer invisible for now.

Select the border and the smaller text and create a shallow pocket toolpath. In the example I used a cut depth of 0.1".

Open the Layer Manager and make the second layer with text visible and active by checking the box and clicking on the layer name to highlight it.

Select all the text and convert to curves using the right click menu.

Now you will use the Weld Selected Vectors tool (icon is in the Edit Objects section) to join the small text with the large text but there is one thing to be careful of - after you select all the text, hold down the shift key and deselect all the "islands" in the letters unless they touch a part of the text you are welding to. If you don't do this, the islands will disappear when you weld, but you can simply do an undo and try again. When you have all the vectors selected/deselected click on the Weld tool icon.

When happy, select the border again and this newly created shape and calculate a slightly deeper pocket toolpath. I used 0.2" in the example. 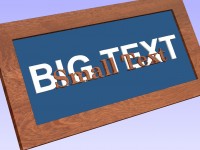 REALLY??? That simple? Wow! I am amazed. Well, I would have never figured that out on my own, but once you follow your instructions, if it VERY simple. Thank you so much for showing me that. I looked and looked for an answer. I am going to play a little more with the islands and make sure I have that part down, but thanks again!!! You made my day!

Tim has saved the day for many of us.

I've waisted many hours trying to figure this out and bam there it is... what type of cutting bit works best for a design like this?
Howie and Rosie Lee Forren
http://www.BacwudzKustumz.com
https://www.facebook.com/BacwudzKustumz
Top

It may not feel like it now but I bet it wasn't a total waste of time and you learned a lot while trying different techniques. This is the place to ask questions and ask for help when needed but I personally feel the people who give it a go first are farther ahead in the long run.

As for which bits to use that really depends on the design and the final appearance you are trying to achieve. In a simple example like this you would probably just use an end mill that is small enough to capture the detail but large enough to minimize machining time. There is a great feature on the Toolpath Tab called "Solid" and if you check this box and then make the toolpath visible by checking its box, a light blue area will appear in the 2D view that shows exactly where the bit you have selected will fit and machine. You can quickly tell by this whether your selected bit will get the job done or you could need a smaller bit or possibly use a larger bit. You can also use the ability to use two bits, one large and one smaller, to clear the area around the text and then capture the detail of the text. All of this is covered well in the tutorials and written documentation.

The topmost layer of text doesn't have to be machined straight sided with an end mill but you could, for example, use the v-bit with the Prism Tool to shape the edges. You would just need to limit the cutting depth so it doesn't cut into the bottom layer of text.

The Toolpath Preview is extremely accurate and you will grow to trust it, so feel free to experiment with different ideas, toolpath it and then preview the toolpath to see what effect is produced and whether it matches what you need.

Thanks Tim and your right it wasnt a total waist of time every day I learn something new about the machine and I'm loving it. I played with this last night and got close still working on the "islands" and getting the small details but I know with a little more time playing in the shed it'll come.
I hadn't thought about using 2 bits I think I'll try that out this weekend.
Howie and Rosie Lee Forren
http://www.BacwudzKustumz.com
https://www.facebook.com/BacwudzKustumz
Top

This process is something I was hoping could be done, and here it is. Now I am wondering can converted 3d patterns from Vectric 3d machinist be layered in the same way with text or other patterns. Have not found anything yet in the tutorials or on the forum yet.

These were made with the Carvewright Designer software.
Thanks, Tom
Carving and making sawdust in LA...Lower Arkansas
Top

I'm reading your question as whether the 3D toolpaths created in 3D Machinist can be imported into VCarve Pro and then combined with VCP toolpaths to create text on top of the 3D shape like your examples.

If this is correct, then unfortunately the answer is no. Any text would need to be added while creating the 3D model in a 3D modeling program and then the toolpaths created in Machinist would also include the text.

To easily do your examples, plus much more complex designs, would require Aspire.

Thanks for your reply Tim. Guess I will have to go ahead and bite the bullet.
Tom
Carving and making sawdust in LA...Lower Arkansas
Top

Ok...stuck again. Just purchased a machine with older version of Partworks. Also tried on new Vcarve demo and get same results. I am almost there after lots of practice on a simple process, but am stuck on this one. I am doing the layered model that was discussed in my original post, however this time I am having problems with the inside of the LARGE a. I have included samples below of the results and the original file. What am I doing wrong. Thanks again for all your support. -Matt 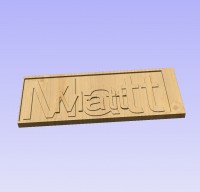 a's not working for me


P.s. Once I get we get this figured out and I get a few signs under my belt, I will most likely upgrade to Vcarve Pro.
Top

That file comes up as being written with a trial version of the software so only you or Vectric can load it.

Hard to see exactly from the picture but it that there isn't enough material between the small a and t allowing for the cutter. What does the solid preview show (turn it on at the bottom of the toolpath tab)?
Top

If you have done this in an older version of Partworks try uploading that File, as Adrian says people can't open a file created in the demo version. Have you tried using a smaller bit as it may be your cutter is to large to fit.
Top

Once again, Thanks for posting Tim.
Others have posted, but I always find yours first:)
Saved my***