I have been working on doing a catch all tray an have been experiencing issues. Upon the final finish pass with the same box cove bit on the same tool path just with smaller step over and deeper start depth at the bottom of the pocket, the toolpath wants to increase the diameter of the existing pocket. Here is what I am doing. I have the pocket tool path set up with a .75 box cove bit (entered in vcarve as a .75 ball nose) going to a depth of .6". I then do the engraving on the bottom of the bowl, paint and then let dry. I then return with same tool path I used to cut the pocket and same .75 box cove bit for the finish pass. I do adjust the step over to 15% and make the start depth .6 with a cut depth of .01. All goes well until it gets to the outside of the pocket, It begins to go farther into the pocket wall. Not sure why this is doing this and any help would be appreciated, thanks.

Attached is Vcarve File as well as a picture of what it is doing. 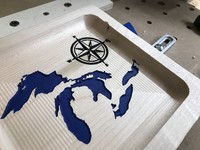 Without looking at the file my first thought is: that you are running a finishing pass on the 1st pocket toolpath but are doing so on the 2nd pocket. This would show as an increase in the X and Y dimensions (not diameter—that’s for circles) of the pocket after the 2nd toolpath is run.
Top

My best guess is that your machine is flexing.

The real way to figure this out is to look at your g code. Check the x and y max values.

BTW, if you are running the exact same tool path then you definitely have a flex issue.
"If you see a good fight, get in it." Dr. Vernon Jones
Top 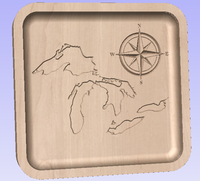 Thanks for the replies. I have a couple questions.
TReischl : How do I check my X and Y max values?

adze_cnc : Could you expand upon, "running a finishing pass on the 1st pocket toolpath but are doing so on the 2nd pocket" Not sure I understand...

This has happened every time I have tried to do this. I would be surprised by flex since the machine is not under much load since it is only taking .01 material off.

Griff,
Imagine you're doing a .1" cut with that bit....
VCP takes into account the radius of the bit and cuts exactly on the vector,
BUT the edge of the bit is way outside the line, and it's cutting on the radius.
NOW with your start depth, you're telling it there isn't any material until the start depth,
and it's making the cut described above!
It doesn't know that now you're cutting with the full width of the bit.

DON'T use the .6" start depth!
Use 0 as start depth, and just make the same exact cut, except at .61".....
Use Edit bit in toolpath to adjust pass depth for just this cut, to make this toolpath a single pass cut(.62"?) to
avoid all the air time.

Hope that makes sense to you.
scott
"A perfect universal hold down is "Unobtainium"
Brady W.

I appreciate everyone’s help and I know it’s been a while since my original post. I just wanted to say that I have tried all of the suggestions and it still wants to carry on into the wall of the pocket. Still not sure why. If it is my machine I will find out soon as my new one is in the mail. I’ll still update if I can find out why it is doing it or if it is specific to the machine. Thanks again.
Top

It was explained why it's doing it in the post from Scott before your last post. If you're using the same settings and the same bit you'll get the same result.
Top
Post Reply
8 posts • Page 1 of 1