A couple of weeks back, while in the south of France, I met an elderly couple who had moved over there a number of years ago. My Wife and three children who live there at the moment have known the couple for a few months now and because my Wife had helped them move to a new home they invited us all for Sunday lunch.
During a conversation the gentleman told me he was once in the No.1 Fighter Squadron in the RAF. In fact he was Squadron Leader. He told me a few tales about the days when he was flying.
Here is a brief description of one of the best he told;

In May 1969 the London Daily Mail sponsored an air race from the top of the GPO Tower in London to the top of the Empire State Building, New York. It was to commemorate the 50th anniversary of the first transatlantic air crossing.
The RAF’s codename for the event was ‘Blue Nylon’.
My new friend, Sq. Ldr. Lecky-Tompson was going to fly his Harrier in the event.

He told me that on the day or his attempt he set off from the GPO Tower and went down in the lift, jumped on a motorcycle and drove to St. Pancras railway station, where he had parked his Harrier the previous day.
After taking off vertically he met up with two Victor refuelling planes from which he refuelled from one. Later he caught up with a further four that had set off from the UK earlier. Finally he met another four that had left the US and after refuelling a total of four times he finally arrived in New York. Not at an airport but at a demolished ‘convent’ that the RAF had acquired for the event. Finally having reached the top of the Empire State building he won the event.

Anyway;
That’s enough of that!

So I decided to make him a ‘litho’ of his take-off from St. Pancras, (picture from a low res jpg off the tinternet), as something to remember the event that will last the rest of his life.

PS. He also told me he is scared of heights. 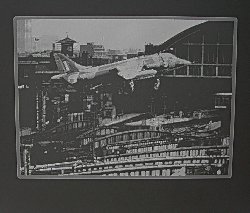 Very kind of you to do something like that. It will be priceless to him. Have you given it to him yet?

No, I haven't given it to him yet. I only made this on Sunday afternoon.
I will take it over with me when I go again about the 20th of July.