I'm still in therapy from the conclusion of this project (just kidding, but maybe I should be). Since I'm tossing my other projects into the forums this week, I might as well share the most ambitious one I've done - La Femme Rocketeer.

Background is that I stumbled upon Antony Ward's book 3D Modeling in Silo: The Official Guide earlier this year and was captivated by the subject - a rather (ahem) "robust" blonde sporting a jetpack and pistol, hovering as if in mid-flight. The truth is I liked the counter-intuitive look of her hair the most. Instead of trailing behind her, it was billowing out in front of her. After a moment of looking at it, I thought "Okay, I get it, she's hovering and the relative wind is coming from behind her - so that's why it flows forward." The very fact that I had to think about it, even for a moment, is extra credit in my book.

Being rather impulsive, I decided I was going to create her. Not just a small model either. Let's go for life size!

Thus the journey began. There were many stumbling blocks along the way. Additional background is that I work for an advertising agency and that they host what they call "Talent Share" every so often. One was coming up for early October 2011 and the point that I started this project was around June, 2011. The Talent Share is not a contest, but rather just an opportunity for employees to showcase any special and talented things that they do.

I knew I'd have to make her out of something light, so pink foam came to mind. I had no experience in cutting it, but how hard could it be? Found out it wasn't hard at all, but that you'd better have your dust collection working. After trashing my linear motion and not one, but two Hitachi routers, I came up with a dust shoe that worked well enough to keep me functional.

Her body is made up from slices. Each slice could be up to 4" thick. I bought 4'x8' panels of 2" thick Foamular 250 at my local home improvement store and cut them into pieces that could fit on the 3'x2' cuttable area of my mill. Then I glued them together to form 4" thick billets.

It was clear that she'd need an armature, or skeleton, to tie all her parts together. I chose half-inch PVC plumbing pipe which has an outside diameter of approximately and inch.

For her skin, I decided to use Styrospray. I bought a 2 gallon kit, ladles for measuring it, and a bunch of chip brushes to apply it with.

What followed was a journey that had moments of pure elation (when something worked the way I'd hoped) and absolute despair (like when one of her fingers broke when I was trying to fit the pistol into her hand). I figured out much of it as I went along, like deciding to create plugs to vaccum-form her helmet and lenses. I certainly can't claim that I had it all figured out from the start.

There was steady progress as the summer wore on, but the last couple weeks ahead of Talent Share got incredibly stressful. Figuring out all the last details of the PVC armature, engineering a display stand and painting her had me questioning my sanity. Luckily, it finally all came together at the end and she was the hit of the show.

I emailed Antony Ward (who names her "Jade Raven," by the way) and he was blown away that anyone would take the model in that direction. He has a page showing her on his web site (http://ant-online.co.uk/2011/10/27/jade ... the-flesh/).

I can't really claim I had a plan for her after she was finished. Since our house has a two-story foyer, I think I'm going to hang her from the ceiling so she can serve as the sentinel watching over entrance to the house. 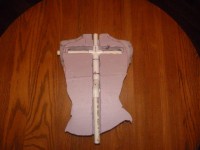 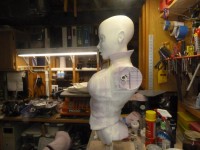 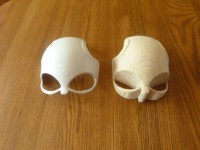 Ok first of all I'm totally impressed. So how did you get the modle into Aspire? thanks Dan
Top

After building that... you realize most of the fun learning with CNC, is a labor of love of doing something interesting, and not a labor of profit.

It looks great, and I can see a lot of labors in your future.

dansfoundry wrote:Ok first of all I'm totally impressed. So how did you get the modle into Aspire? thanks Dan

Thanks for the feedback. Didn't use Aspire. Maybe some day when I can afford it.

Used Cut3D and imported it as an OBJ. But did a LOT of work in other packages to section, transform and scale the elements that would ultimately end up on the bed of the CNC mill.
Top

Awesome stuff! Don't ya hate it when you're inspired by a concept, and you think.... "hmmmm I wonder if Cut 3-D could work?" and then another season has vanished?
Top

Wow! What a great job you did. Thanks for sharing. It is inspiring what people can do with their creativity.
Top

Blows me away! (and gave me some ideas too!)

I use pvc for a lot of my paper mache sculptures and love how easy it is to work with as well as being light and quick setting. I have never considered doing my 3D sculptures on the CNC (I guess I just like working in clay) but this gets the grey cells going tonight!

Thanks for posting! I checked out the Ward site and the Facebook site. Loving it!!!

That's incredible. I am seriously impressed. Did you do the modeling in Silo, and was it exportable to Cut3D?

zeeway wrote:That's incredible. I am seriously impressed. Did you do the modeling in Silo, and was it exportable to Cut3D?

Yes, Antony's book is a tutorial that takes you through a comprehensive modeling exercise using Silo 3D. At the end of it you have this figure. Silo exports to OBJ files which Cut3D can directly import. See the screen capture below for an import of her torso slice.

One thing I didn't mention was the challenge of milling something that was 4" thick. I had to find extra long length (like 6") bits in order to have enough length to pass through the dust shoe and reach down to the deepest parts.

A true labor of love! I'll bet you learned a lot about Silo! Just how big is that book?

larrybadgett wrote:A true labor of love! I'll bet you learned a lot about Silo! Just how big is that book?

Sorry, been using Blender for several years. It's free

Not a lot of difference it's just that back when i started there were more instructional material on Blender available so i went that way. I still have Silo though

Seeing your work and seeing the few amount of comments I will only say that we are all speechless.
Fabulous work!
Michael
Michael Mezalick
https://carveddetails.com
mm@mezalick.com
Top

mezalick wrote:Seeing your work and seeing the few amount of comments I will only say that we are all speechless.
Fabulous work!
Michael

Thank you, Michael. It is rewarding to read the feedback and I truly appreciate the comments. I have followed so many other projects in the Vectric forums, on CNCZone and elsewhere, that have helped me understand what is possible and given me ideas about what to try next.

Again, thanks for your kind comments.
Top

You are an inspiration!!
Don't apologise for "the long post", we want ALL the details