Shame about the crack in the grip:(
Seems to make awesome looking grips! I still remember a pair of 1911 Scott W's spalted grips that put the ones he did in my Bigleaf Quilted Maple to shame:)
Haven't worked with it much...Still trying to figure where in the house this piece Pappy Baynes gave me is going to go, to show it off full length.
Nice work Doug

Wow, nice plank to drool for.

No crack in the grip, would have tossed it if there was. Just pointing out that spalted wood can have a tendency to split.
I found a guy on craigslist who has loads of it fairly cheap, think I shall make a return visit and stock up.
Doug

Sorry, thought I saw on on left in top grip:(
Yep, need to do that plank justice:)
Clamps/bits/and Wood....never enough

Finally got it complete, cut out a recess in a 22x13" 1" thick walnut block and glued it in.

Hairline cracks on 3 sides of the inlay, I tried some walnut wood putty on the bottom, color was more red than brown. Was worried it would stain the wood, after it dried somewhat I sanded if off and it did in fact leave a stain, so I decided better to have the small cracks than reddish stained wood.

Ended up just clear coating the whole thing with a rattle can. 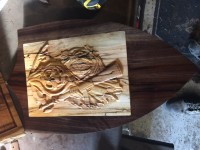 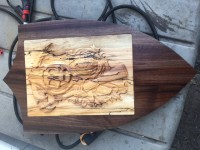 Can someone help me out? My brother in law really liked SOA so I want to try making him one. Maybe I'm just searching the wrong terms on ebay but cant find this model

I tried SOA reaper, Mr Mayhem, Reaper and nothing, lol.

Email badbird@comcast.net, ebay guy is often taken down for copyright violations which are still enforced by Fox for SOA items.
Doug

Here is a custom order I did for a chick, she requested extra blank wood margins because this is going to be signed by the cast later this month.

10x18", turned out pretty nice.
Had problems with the lettering, when I had the model stretched to cover most of the blank, vcarve preview looked good. When I shrunk the entire thing as per her request, vcarve toolpath ran but it didn't show anything on the preview.
Not much of a vcarve expert, I figured I had got to the point where small size was restricting depth to near nothing.
So I ended up just doing pockets with an engrave bit. Was too conservative on the depth [I was worried about going too deep and ruining the whole thing].

Letters were very weak, not much more than impressions. Thought maybe I could color them in with a dark brown but thought that would look tacky.
Lost center position, so my options were do another one or make the letters deeper by hand.
Used a dremel with a very small engrave type bit, turned out pretty nice.

I'll post back if I get a pic of it signed. 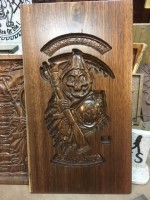 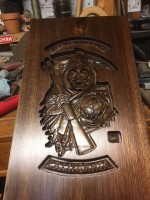 Shweet. That is quite the collectable. Too Bad you couldn't have gotten her to get 2 of them signed one for you as you have made a butt load of these things. Thanks for sharing.

Not sure if I'd even want one signed, might want the signatures on the back if I did. To me thats almost desecration but I guess to a huge SOA fan, thats like a holy grail and could also be valuable. Then again, I am guessing these guys sign lots and lots of autographs and they'll never be exactly scarce. But autographs combined with a unique piece like this, who knows.
Doug

Users browsing this forum: No registered users and 2 guests