A simple way to make inlays

Doug,
The .pdf is on the very first entry on the thread, and is still active.
Tutorial is very good also;
http://www.vectric.com/support/training-material/bonus/vinlay.html
scott
"One accurate measurement is worth a thousand expert opinions"

I figured the 1st post would have been outdated since it is a decade old and revised techniques are constantly mentioned throughout the thread.

I'll give it a shot soon, I at least have my brain wrapped around the concept now, sounds pretty slick, I can see the beauty of the method.
Doug

First attempt, turned out nice considering it is fairly intricate and small.

Some minor lifting or sanded out areas, the thin lines and eyeballs didn't come out too well, but I am amazed it came out as good as it did.
Was extra careful that both blanks were uniform thickness and also careful with level and Z zero.
Used a bandsaw for the cut and sanded with light grit drum sander.

Am going to try another considerably larger, I can see the beauty of this system - No way a design like this would be remotely possible with conventional inlay techniques. 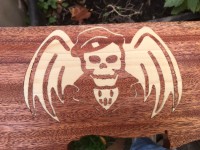 I have run into a practical limit here.
A union logo, 1st pic shows what its supposed to look like, 2nd the vinlay botch.

Many of the details in this were very shallow, and some areas very deep. Thus by the time it was sanded smooth the fine details got sanded away like they were not even there..
Maybe someone with more experience could have pulled it off, for now I'll stick with simpler designs.

Going to try to salvage it by hopefully recarving the bulldog and saw blade then leaving as is. 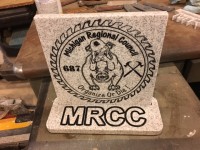 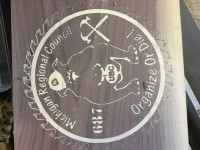 Doug,
What angle bit did you use?
I've used a 60degree engraving, but a few have posted with good results using a 30 degree so it goes deeper for fine details.
Flatness of everything is King, and cutting everything and gluing the same day is best.
Was it a good dry fit, and clamped evenly?
Mucked up my first big one by clamping unevenly, and had resurface board .023" to get perfectly flat, and recarve it .01" deeper. It looked a lot like yours:(
Good luck on the rescue, but I'd do the whole thing again on the same board.
scott

I made a larger version of the MC logo I first posted and it came out flawless.
Am fairly certain my methods of level/clamp/glue are up to snuff. I tend to overdo things from force of habit, I glued the snot out of it both blanks and used no fewer than 6 press clamps and a c clamp in the middle, let it sit around 20 hours using Titebond 3.
Dry fit seemed good, I used the 687, crossed hammers and hat as pivots and it locked in ,,, As good as those came out [and the lettering] I think the fit was right on.

The details that make up this bulldog, you can barely scratch a fingernail into and not much more on the sawblade. I don't think there is enough of a cavity for the wood to bite into, plus being so flush to the surface, if the details didn't sand out I would have had high spots. I made about 10 light passes with the drum sander and it looked promising until the last 2 passes.
Used a 60 on this ... I'm all but convinced this design is impossible to inlay.

Blank will not go to waste, I can flip it and do something else with it. I tried to cut back in the details of the dog and blade but for whatever reason, it wants to cut everything I don't want cut and I just had enough of this project to put any more time into it.

Don't get me wrong, I'm not soured on this method, I think I just pushed it too far - An inlay too far !
Doug

To achieve the fine lines you may need to change your approach. If you were to inlay the outline wood then v- inlay into the previous inlay and so on. Each inlay would be slightly shallower with the first one being a little deeper than normal.

Have you trimmed your spoilboard? Looks like you may be seeing a bit of slope from your wasteboard on your first attempt.

You can try a 30 degree v bit or a 22 degree for the finer details.

I use an adjustable corian board on top of my spoilboard to do my cuts and, as I do alot of precision work, I always make sure it is dead level.
Of course, its possible the gantry may not be dead square to the board, but I often do cuts as shallow as .012 over a square ft, if my rig was off it would for sure show up and it doesn't.

I don't discount the possibility this could be inlaid, but not by me at this point. I bit off more than I can chew, I'll digress to less complex projects for the time being. If you guys saw how shallow the dog details were, I think you'd agree its not worth the effort. It did get the dog outline Ok, that was very thin but alot deeper than the details.
Doug

Here are a couple I made, some minor lifting in some areas I presume maybe from lack of glue even though I glued the snot out of both.

Nice detail, walnut in yellowheart and padauk in poplar. 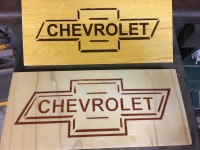 Nice work Doug always a pleasure seeing your work and the details you give are second to none.
Thanks for sharing.
D-Dub
Dwayne
Dwilli

I post the good, the bad and the ugly - This one is the last 2 rolled into 1.

Premium chunks of bocote & padauk gone to waste ,,, Completely lifted in one area which, after 21 hours at room temp, is still a gooey mess.

* Bocote is an oily/waxy wood, perhaps not suitable for gluing
* Too much glue

Just may be a combination of both, though this design is composed of large curved recesses, and I understood there should be enough glue in the pocket for the male to touch, and this is what I did.

This was a paid request so am going to have to try again with another species, I have no confidence in gluing bocote right now. 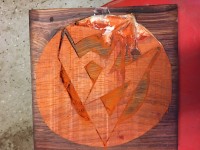 I would suspect the oil in the Bocote or high moisture content if it was from a turning blank.

When gluing oily woods, you need to attempt to remove the oil with lacquer thinner or naphtha prior to gluing. You can also try epoxy or polyurethane glue for oily woods, I use 30 minute epoxy (when required) for inlays.

You can try to run the V-Carving again on the Bocote, if you surface it by 1/32" and run again, it should remove the previous inlay with the roughing and V-carve tool paths.

With boat builders using Teak, the old way was acetone to remove the oils, people who have gone to less harmful denatured alcohol report good results.
"One accurate measurement is worth a thousand expert opinions"

I'll look into acetone if I ever get the gumption to try bocote again.

Blank is less than .5 thick, so its tough to see any further use being made out of the blank.
More than likely it will go up in a blaze of glory in the spring.
Doug

It has almost been a year since the last post. Must be time for another

I have read a lot of the posts, but not all. I have never understood the relationship well enough, to do anything but what the PDF said. Now I want to make a deeper Inlay on a cutting board. So I tried to draw up a simple square Inlay and tried different values. I must be doing something wrong though, because when I use a .1 start depth and a .2 Flat depth on the inlay, and a .3 flat depth on the pocket I come up with a .2 gap between the two parts at the bottom. In fact I seem to come up with the gap is always the same as the Inlay flat depth. Can anyone look at this drawing and tell me what I am doing wrong?

Users browsing this forum: No registered users and 3 guests