Gadgets are the primary means of extending the capabilities of Vectric software or automating some sort of operation within Aspire or VcarvePro. I wanted to learn the mechanics of developing a gadget, one that required only the basics of the Gadget SDK. I had seen a couple of references in the forum to a Spirograph generator and saw that there was such a generator available for the Shopbot, so that's what I chose as my learning tool.

Attached is version 1.0 of my Aspirograph gadget. It can create Spirograph-like vectors, the difference being that Aspirograph creates a series of line segments rather than a true curve. But once the vector is created, use the Fit Curves to Selected Vectors function within Aspire or VcarvePro to smooth out the vector. The Create and Delete buttons within the gadget allow the vector parameters to be quickly varied until the desired vector is generated before leaving the gadget window. 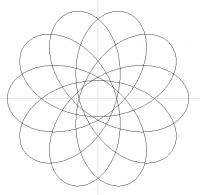 While this was fun to create and was a good learning experience, I tried figuring out what it might actually be used for, thinking that unless you wanted to carve out some polar graphs for a high school math class, it might just be kind of a neat drawing demonstration. But since then I've thought of a couple of possible applications for these curves. I think they could potentially make some pretty neat edge-lit acrylic pieces, and then it occurred to me that these could generate some nice Extrude and Weave patterns.

I'm hoping you will find other creative ways to make this gadget useful -- please share if you do. And if you post an image of an Aspirograph vector, you might consider providing the parameters used to generate it in case others want to try to duplicate it (I've put them in the names of the images I attached). Anyway, try it out and make sure it works for you. Comments and suggestions welcome.

Thank you.
I am looking forward to have a play with it

Will this work in V-Carve Desktop or is Pro required?

The desktop versions do not support gadgets so it will not work.

If you do a screen shot of the black vector, save as an image, then import the image as a bitmap, you should be able to trace the bitmap to produce a set of closed, non-overlapping vectors that can be V-carved.
Paul Rowntree
WarpDriver, StandingWave, Topo and gadgets available at PaulRowntree.weebly.com

Just a first shot to play with:)
Default setting with a profile on line.
Definitely worth more playing

would you be happy to have this gadget on the Vectric Gadgets Website?

If so please let me know,

I tried the gadget a few times and it seem to work fine. The last time I tried it though, it crashed Aspire. Killed it.
Aspire asked if I wanted to create a dump file and I said yes, then it just shut down.

I can send the dump file once I find it if needed.

Just as a test I entered values of 1,1,1. Yea, was testing for major bugs.

Would be nice if real numbers were available, but works fine, just stay away from, 1,1,1.

Thanks alot for the contribution.
Terry

Thanks vgraves.
The process of downloading and installing the gadget into Aspire 4.5 went smoothly.
This gadget bought back those memories from my childhood.
I appricate the effort that gadget makers go to.
Thanks again.

Glad it's (mostly) working. I'll try to put some more data validation checks in the code when I get a chance.

Users browsing this forum: No registered users and 1 guest