Here is a chart that has helped me to figure out what V bit angle I was using.
I found I was not close in my guessing. Found this chart handy. My cuts
look like they are suppose to now. 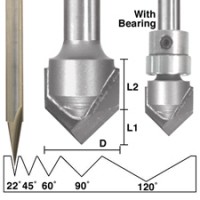 Paul Z, you may have unwittingly shown another issue that is seen many time in the Galleries of the various Vectric forums and that being that your cut is too deep.
Regardless of the correct or incorrect angle being used for a V-Cutter, the corners of the cut should be sharp, not radiused as shown in your example.
Even a 60 degree tool toolpathed as a 90 degree will still produce sharp corners when set at the correct height. The corners will not be square but they will be sharp.

Whilst I normally set my material height from the spoil board up, when V-Carving it's always from the top down and as close to accurate as possible.

Many times in the galleries here you will see letters that have become fatter (bolder) because the V-carving is too deep. Might look OK for some but completely incorrect.

On the other hand if the cut is not deep enough the corners will be sharp but some detail can disappear.

Apologies in advance if someone else has mentioned this in their replies.

I use the test various angle settings in tool settings to find the correct angle. For small fine text I cut my own D-bits and have found that the cutters are actually 84 degrees although my cutter grinder is set at 90 degrees. 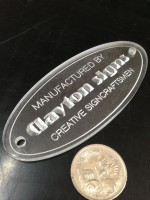 Finally got a chance to repay the guy who picked my Desktop up from the shipping terminal in his truck and helped me uncrate.
Bedroom door sign for a 6yr old girl who likes snakes and frogs(Yuck).
Decided to dial in a new Kyocera .25" 90VBit- quite dismayed to find "waterlines" I could catch a fingernail on(barely).
Remembered a thread by Paul Z for testing the actual angle of a VBit and downloaded the file. Had scrap on right of Cherry for the test if I re-arranged them.
Cut first at an included angle in tool database of 90 degrees and got the same as the carving. Then changing only the angle of the bit in the database, I went from 85-92 degrees. 88 degrees was better.At 86 degrees I was getting toolmarks from the outer diameter of the bit when it went to clean up the corners. at 92 degrees waterline was worse.
Also tested at 40% faster feed/speed and pass depth as I always feel I'm cutting slow compared to you guys even though chips and bit temp say otherwise. Didn't like the idea of sanding this kind of thing though--so just letting the machine do the work while I do other stuff.
I thought the 87degree included angle looked best, so changed that in the database and decreased pass depth 30%( so any new marks would be at a different height from originals) and rezeroed .006" (not enough to eliminate old marks )lower.
Only "waterlines" were the originals MUCH reduced and NO new ones BUT it's a much more intricate cut than the test triangle and many more passes, so you'll see toolmarks in corners so I'm TOO steep now. I'll change to about 78.8degrees next time I use the bit.
By then it was getting late, so was going to recut this morning BUT idiot me shut down, and any cut now would have been a hair off--Oh well next time.
Interesting though are the toolmarks from 85-87 degrees as they are the same exact marks I get from my Vortex .25" 60 VBit that drove me so nuts doing deep cuts I stopped using it and used an Onsrud 60 engraving for those cuts. I bet if I dial in 62-63 degrees on the Vortex they'll disappear
I KNOW the right way is to have a VBit that is large enough to do a full pass afterwards, but money is tight and working with what I have.
Hope this is of some help to somebody.
Thanks Paul--You helped me!!! Again
scott

What I do is the best and once setup very quick

Mark out a spare section of wall in workshop with a 2 foot length of lines at all the angles of the cutters you use.
You will essentiality have a load of upside down v shapes on the wall nested inside each other and about 2 feet in height.
Then all you do is hold a tiny v bit in your hand and hold it up in front of a powerful torch and ajust the distance away from the torch and also the wall.when you have got it right you will see a large shadow of the vbit on the wall that you line up with the markings.
After a couple of practice's you can do this in seconds. Job done.
You could mark the wall with 1 degree angles if you need to know the exact angle.
I hope this works for some people out there.

When running your test program, should I leave the Cut Depth set at .2"?
Dave

Chalfontcrew---I really liked your clever idea. I've got a whiteboard in my shop and will draw a few angles on it to try out your method this weekend. But, only use a torch for this purpose when you're in the UK....in the US please use a flashlight

What I would like to know is how you have verified that the spindle is properly aligned. If the spindle is off vertical with respect to the table then a perfect bit will appear to be off. When using a large cutter to level the spoiler board the ridges left would imply that the bit is not level with the machine axis.

Hello. I not sure why the software is cutting like this when i cut vcarve it leaves the little sharp points at the corner of each letter.
help please
thanks M2

Your file is programmed for a 90 degree bit. Is that what you're using?

Users browsing this forum: No registered users and 7 guests