Dang near forgot I had the thing, also forgot I had this clock, found it in a dumpster months ago during the chill of winter, tossed it in an outdoor storage box and rediscovered it last weekend.
I grabbed it mostly for the movement, the whole face was peeling off. As I was taking off the movement I figured, why not try to repurpose it with another face. After spinning through some ideas, I decided to do a CNC pen design.

Used some glossy paper, was worried about ink bleed. Design came out acceptable, all the pockets I colored by hand and also retraced much of it with a paint pen, pen was fairly weak on the gloss. Also used a silver paint pen for the blade ... As you can tell, in designs like this I like to make the central design as large as possible, therefore I sacrifice the numerals. Don't always do that but with this union design, I do. Would have been considerably smaller with 12 numbers, and this clock, though functional, is more eye candy than anything.

All in all pretty happy with it, basically turned scrap into a useful object, could see getting $40 out of it as well, though often I will donate stuff like this for union charity raffles we have sometimes for sick members ect. Have more clocks like this I am going to breathe new life into, I used 3M adhesive spray to tack it down [Didn't quite cut the circle large enough, should have pen plotted a circle but I didn't and came up short eyeballing it].

A quality CNC plotter pen setup should be in everyones kit IMO. 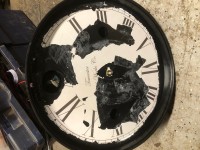 Clock face was FUBAR, I have seen others like this and actually passed on them, I'll be scooping them up from now on. At first I was going to scrape off everything then figured there was no use, what was left was stuck very good so I just glued on top of that. 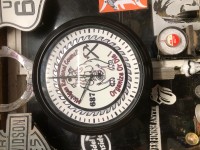 Looks great from a distance, lots of flaws up close - Gloss paper is not easy to work with, will probably try another type next time. With the 3M spray on adhesive you had better make sure you have it lined up right the 1st time, once the surfaces touch they bond instantly. I was worried about glue soak, another reason I decided to use gloss paper.

Like how you're always learning new stuff...AND getting better at it:)
Regular Sharpie holder? (I keep looking for X-Fine points:(
Well Done!!
scott
"One accurate measurement is worth a thousand expert opinions"

Nicely done and a great effort.

Another option to plotting it is having it printed by a local sign shop if you need it darned near perfect. I have done a couple of things with my local one and I was flat out amazed at the results. And it was inexpensive to boot!
"If you see a good fight, get in it." Dr. Vernon Jones

Like how you're always learning new stuff...AND getting better at it:)
Regular Sharpie holder? (I keep looking for X-Fine points:(
Well Done!!
scott

This was done with a fine sharpie, I thought xfine might dig into the paper.
Got the holder from a guy at the Cam forum, think he posts here - He has upgraded the design since I got mine, but still works fine

Thanks Doug!!
Bookmarked!
Not enough Z for the fine point here:(
Appreciate it!
scott
"One accurate measurement is worth a thousand expert opinions"

Here's the pen plotter option I tried out.

The design was 3D printed from a Thingiverse design.

Haven't tried with a fine tip, but it should work.
John
Maker of Chips

The design was 3D printed from a Thingiverse design.

Haven't tried with a fine tip, but it should work.

You printed one out or bought it ?
Doug

Printed it.
John
Maker of Chips

NG for me John, but Thanks:)
"One accurate measurement is worth a thousand expert opinions"

Did a new and improved version, turned out nice. For sure, I would look into printing them if I was doing a run of these. 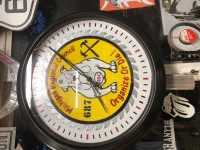 Looks great! Looks like a hand painted clock face, that's a good thing. Did you use the plotter on the whole sign, including the yellow background?
John
Maker of Chips

highpockets wrote:Looks great! Looks like a hand painted clock face, that's a good thing. Did you use the plotter on the whole sign, including the yellow background?

No, just outline. I hand painted the yellow, red and black pockets mostly with paint pens. This is the type of thing that can be appreciated better at a distance, and luckily clocks like this by default are generally at a little distance.

I'm thinking it would have looked horrendous if I had the plotter doing the pockets, and I would have had to go over it by hand anyhow.
Doug

I like the hand painted look.
John
Maker of Chips

Users browsing this forum: No registered users and 13 guests