Life recently necessitated a picture frame to honor my Mom. Red was her favorite color and just so happens I had some Ruby Glass by Avonite leftover from a job years ago. First time tooling this material on the CNC. Made 1 for myself to see the outcome and then array cut 3 more, 1 for each sister. Holds a 4x6 picture and the bottom of the banner acts as legs with the kickstand from the backing (not installed in pic) as the rear support. 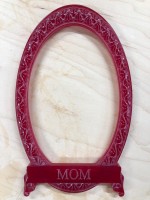 Finish pass was with an .0312BN, 25IPM feed, 15K speed and 9% stepover. As I'm still learning how to operate my machine efficiently, I'm sure there are improvements to be made.

Looking real forward to doing more with this material in the future.

Beautiful and thoughtful work!
Haven't seen that particular material before, Kinda reminds me of "Bloodglass" we had in a Victorian front door....Thanks.
Sure to be appreciated by your sisters!
Well Done Joe!!
scott
"One accurate measurement is worth a thousand expert opinions"

Never heard of bloodglass and had to look it up. Must have been a beautiful door!

The Avonite Glass Series is really quite stunning particularly in backlit applications.

Joe...Is This it;
https://aristechsurfaces.com/studio/colors/ruby-glass.html
I imagine it's beautiful when backlit!

Lots of pics of 38Summer St.,
But none of etched Ruby(?) Blood Glass front door 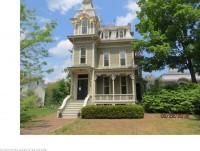 Closest I found was this.

Dad threw a hissy fit when Hysterical Society(Historical) demanded glass could NOT be replaced with similar.
He had to call in some favors from a friend at Dow Corning to have a crack fused $$$$

My Sincerest sympathy!
My Dad is now on Home Hospice care with 24 hour attendants...Can't imagine how I'll feel

VERY nice Homage to your Mother!!
Luckily Dad's favorite is wood! (Teak)
scott
"One accurate measurement is worth a thousand expert opinions"

We have some from my wife's grandmother.

Thank you so much for the sentiment Scott. I'm sorry to hear about your Dad. I really wish I had the right thing to say but, unfortunately, I don't. I will add this though...I believe our generation was raised with the idea that the strong man does not show emotion. BS in my book! I believe that it IS the strong man who reveals his emotion without fear nor shame. I don't know you but something inside tells me you have a very good heart and your Dad raised a strong man.

The house is absolutely gorgeous! I can only imagine what the inside trimwork looks like. Proud to be a Carpenter my entire life and love houses

Yep that's the Avonite product on the Aristech link.

And today I learned about Bloodglass. There was a cup my Mom cherished with a name and date of 1903 that now I know is Bloodglass. Funny how things unfold as I was admiring it just a couple months ago.

Joe,
Strong,True and Brave words in that first paragraph!!
I don't think there ARE correct words to say when it comes to us all....Just being there for someone is enough!
Got an email from a very good friend in Oz finally describing HIS Dad's end, and comparatively...I've got it easy.
Luckily Dad got me into CNC 5+ years ago because I knew wood fairly well, after designing/building(general'ing with a crew of 3 VERY good carpenters for 3 years)this Wheelchair house I plan on dying in:)
Those 5 years brought us much closer together as he learned Wood,and I learned CNC production, so we could get a business in the Black and give second machine and company away.
Saw and talked to him more in those five years than the previous 40, and we got to know each others opinions and attitudes well, and agreed to disagree:)

You're right:) Gram and Gramp passed onto Dad "If it ain't bleeding...you Can't cry"....Luckily Dad and I outgrew that

Now onto Wood:)
I didn't know Diddly, until I stopped studying Architecture when I found out anything under 5,000sf, didn't NEED an Architect, and designed everything except my trusses. Hard part was to tell my carpenters "It takes as long as it takes" and "Do the best you can" and get them out of current house production mode....Kinda Frank Lloyd Wright'ish with LOTS of hidden Joinery...near the end, Paul asked me what kind of joint to use under a glass block section...I said "What kind of joint Haven't we used?" and he said "Well, we haven't used a Butt Joint."...so Butt Joint it was...the only interior one in the house

My first visit to pick out some boards at a hardwood supplier was a confusing NIGHTMARE for me:)
But I studied and learned until even the salesmen knew to give me a call when some "squirrelly" wood came in.

Forgot about the blood glass side door transom, 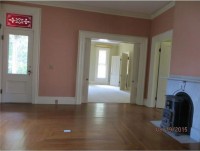 ..front door the same except two pieces the same size as the lower clear glass door...lovely Southern exposure, and backlit was beautiful!!
Whole row of Sea Captains houses on Summer St., Kennebunk...and all trying to out do the others...Sea Captains brought back stuff slightly ahead of their times:)
Victorian was built in 1875, and had been unlived in since the 80+ yr recluse and his Jamaican(?) female servant died 8 yrs before we bought it....ceilings sagging/dry rot and roof leaks.
MOST impressed by the Art of plastering back then, BUT if I never see horsehair plaster and lath again...it'll be too soon!!
DID like the weather notes on the back of the trim I tore carefully down...and a LOT of notes written on the carriage house beams!! And encouraged my carpenters to do the same.
Climbed a ladder once to inspect some joinery unexpectedly, and ran across Doug's message "Perfectionists SU*K"

Be a blast for someone in the future to see the notes:)
Don't really care for what the owners since have done...House is "haunted"s supposedly, and 5 owners since we sold in late 80's may prove it:)
https://www.realtor.com/realestateandhomes-detail/38-Summer-St_Kennebunk_ME_04043_M32417-82724#photo0

NOW, if you REALLY want to see some woodwork, check out John's Wife's family's private residence In Camden(Dad has HIGH respect for all that family did for the town during Depression!)
Look at the OLD woodwork....there's a fireplace and a reading "Landing from Heaven";
https://www.norumbegainn.com/gallery/
John was lucky enough to stay there...I only admired it the Many times I walked/rode by:)

1903......Before blood glass became common..cherish it!!
Thanks again for the True words, and seeing a new material I'll be scrounging around for a small piece for a night light here in house(value my night vision here in the country), but at new moon, wheelchair tends to crash into stuff at high speed before coffee consumed and feet suffer

Looks like a serendipitous thread all around!!!
And don't have words to say what it meant to me.
Don't know about the "strong man" though......working like heck to look with the eyes of a child:)
scott
"One accurate measurement is worth a thousand expert opinions"

Users browsing this forum: No registered users and 14 guests