Made for a friends back porch bar... 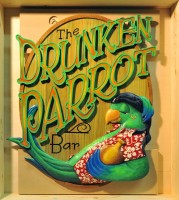 That is awesome !!! I wish I had someone that could paint.

That is stellar. Great everything. Love the colors and the wow factor.

If you can, please go through how you carved than painted that.

I have poor luck uploading images to this forum.. For the intermediate stage images you'll have to look at my Picasa folder..

Unfortunately, the sign was for a buddy so I charged a fraction of what it was worth.. The process (I'm guessing 40 hours with design work) goes something like...

Nearly the exact same process but I made a mistake somewhere and the thing got about 20% larger.. (oops)

This signs are great. Thanks so much for taking the time to explain the process!

Wow, just wow thanks for sharing all that. very well done, and yes worth far more than you could charge.. great work, and make sure you keep your daughter happy... that girl has some crazy skills...

Users browsing this forum: No registered users and 7 guests