Anyone have an idea why the zero plane changes from 0.00 to -0.50 for no apparent reason ( aspire 4)?
When creating a dish shape the first one works and the zero plane remains at 0.00 but the second one changes the zero plane to -0.50. I've repeated the same job 5-times from scratch and the same thing happens every time even though the second recessed dish is not necessarily the same as the previous job.
I have not determined exactly when the change occurs but it affects the entire job.
I've tried grouping the zero plane with the dish before creating a new dish, same result.
I've tried using the zero plane at the beginning and the end, same result.
The result is that all the entire job, including v-carving, is 0.50" too deep.
I also notice that when I hover over the 3-d view, pushing the shift key changes the zero plane from -0.50 to 0.00 as long as the key is held down.

Thanks in advance,
Dale 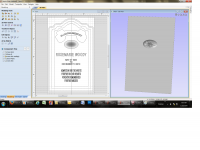 You will get old if you live long enough!

My guess is that you are Z Zeroing from the top of your material.
If so, try changing the Z Zero to measure for the bottom and see if you get a positive number.
Now don’t quote me on this but it appears that when you hold the shift key down you will get the actual measurements of the Z heights, starting with 0.00 because you included a Z Zero plane.

You will also get different readings based upon where the model is placed within your material
Michael
Michael Mezalick
https://carveddetails.com
mm@mezalick.com

Did you check your material setup to verify there's no gap above the model?
Chris
http://www.cncmilitaryemblems.com

Thanks for the replies.
I didn't find an answer but I have determined when it happens and I have figured out a way to get around the problem.

I did check all the suggestions posted and all the settings were correct; no gap above material, changed z-zero to the bottom (no change). I deleted everything [components, lines, 3d-art etc] including zero plane layer, added zero plane again and it is at -0.50.

Thanks again, Dale
You will get old if you live long enough!