Owl plaque was made in honer of the owl I rescued and released this year.
https://www.dropbox.com/s/hzdw6giumkwmq ... t.jpg?dl=0
Thank You
Doug

Nice carving ! what had happened to the owl that it needed rescuing? Merry Christmas Don

In August I came home from a woodworker guild meeting will puling into the driveway I saw this owl setting in the driveway. I put my truck in the shop and walked to the house, the owl was still there. I did not want to disturb it, so I continued into the house. The next morning on my way to the shop, I saw the owl by the front door. Again I did not want the disturb the owl. Later I check on the owl and it was still there. I trapped a Vole and gave it to the owl. The Vole did not last long. The next morning my wife and I walked out to check on the owl, it was laying down with it's eye's closed. When we approached it opened those big yellow eye's as if to say HELP ME. We called the Division of Wild Life and they ask if I could bring it to there office. I picked the owl up and placed him into a box and drove to the Wild Life office. They took him and my name and phone number. They said if he make it they will call me.
Two mounts later I received a call from the Wildlife Rehabilitation Center. They said that my owl made it and is ready for release. Would I like to release him? I said yes.
Too see him alive and be able to hold him again and than release he back into the wild. What an experience.
See the release photo. 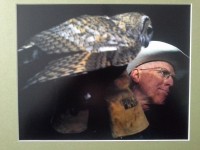 that picture of you releasing the owl would make a good carving as well. thanks for you taking the time to reply. Don

What a lovely story

And a great carving as well.
Cheers
Wolffie

Glad you enjoyed it.
Thank You
Doug

congratulations on the rehab and the great tribute to our feathered friends I had to smile a bit because it reminded of me of a downy woodpecker we rehabbed years ago. when it was able to fly we would let it loose in our cabin for some preflight training. well he would fly over to me and land on my chest and dig through my beard. looking for bugs I guess

Thank you for sharing the story of the owl and the plaque! Well done on both projects!!
Mike Schnorr
www.artcentergraphics.com
www.baconwood.com

Thanks' that was an experience. I have also made a second Owl plaque to give to the Ellicott Wildlife Rehabilitation Center.
Thank You
Doug

Users browsing this forum: No registered users and 1 guest